What is Augmented Reality? Why does it matter? Augmented Reality has the potential to change the way people interact with technology and information altogether. Teachers can use AR to teach students. Service technicians can use it to flush out problems that users call in about, but have no way to explain over the phone. Businesses can use it to offer enhanced customer service and increase sales conversions. So what is Augmented Reality and why should business owners care? Let’s take a closer look.

What is augmented reality and how does it work?

At its most basic form, AR is anything that superimposes a computer-generated image on a user’s view of the real world. Augmented Reality apps on your phone or tablet use the device’s camera to show you what the scene looks like, then they overlay digital objects on top of whatever you are actually seeing.

The first step in creating an augmented reality app is to map the environment. That means scanning your physical space so that it can be measured against GPS coordinates. AR apps will also create a digital model of the space using 3D imaging, then “pin” virtual objects to specific locations in that 3D model.

What are the benefits of AR for business?

AR allows businesses to provide digital information about products or property that can be viewed by potential customers. For example, a real estate agent could show you what the inside of a house looks like – even though it’s not there in front of you. A restaurant could allow customers to see what their food will look like before they order. Businesses can post digital signs in their stores to show users more information about products. Retailers use AR to show off product features and allow customers to visualize the product in their home. Virtual try-on apps have become popular, especially in the eyeglass industry. Warby Parker was one of the first eyeglass makers to provide virtual try-on technology via their app.

AR can be instructional by providing step-by-step directions through a process that can be difficult to explain. If you need someone to assemble something, AR shows the user what each step looks like before they do it.

What types of businesses should use augmented reality?

AR is a great way to provide information for service personnel working in a field where they need to know how something works, or where help is needed at a certain location. AR is used by companies that have a lot of product assembly required before delivery. There are a variety of options for AR apps, so it’s a good idea to speak with a developer about which platform would work best for your business. ViviScape’s team of app developers can answer any questions you have about VR and AR technology.

Almost any type of company can use augmented reality. If you can think of an app that allows users to learn more about something as they look at it – there is probably an AR version of that app. For example, if you need a repairman to fix a plumbing problem at your house – it would be helpful if they had an option to see what the situation looks like before they get there. You could have them look at it through an AR app on their phone and use live video from the camera as they walk through the steps to fix it. Home Depot and other home supply stores use AR to demonstrate installation and use of some appliances and tools. Want to know how your room would look in a different paint color? There’s an app for that, too!

How has augmented reality been used in the past and what are some current examples?

The best example of AR in business is the way that it has been used by Ikea to promote their products. Their app allows users to place virtual furniture in their homes so they can see what it looks like before they purchase it. This provides an easy way to visualize something without having to transport a large load of samples around with them.

One of the most popular examples is the game Pokemon Go, which encourages users to explore real-world environments so that they can catch virtual Pokémon characters in their area.

Retailers like Target, Sephora, and IKEA are using augmented reality for virtual try-on features on their websites. You can spin a product and get a full 360 view of the object and its features on Target’s website. Sephora allows you to try on different lipstick colors with the use of AR. IKEA allows you to visualize new furniture in your home.

Not everyone is keen on viewing VR experiences through a bulky headset. That’s why AR apps are now available on smartphones and mobile devices. There are even lighter versions of AR goggles out there now with Ray-Ban’s “Stories” smart glasses. Apple’s new AR smart glasses are expected to be released in a couple of years. Television displays will eventually change to include AR technology. Lightform has a LF2+ AR projector that project maps AR images and animations on any surface.

The intermingling of virtual reality, augmented reality, and projection mapping is revolutionary. With the LF2+AR projector you can turn any surface into an interactive screen that responds with projected images just by touching them.

Augmented Reality is also being used by businesses that require large amounts of product assembly. Onshape allows users to walk around their workspace and create a 3D model of an object that will be printed during the assembly process. This provides a user-friendly interface for those who have never used CAD software before and it helps them visualize the entire project as they go through each step.

What Equipment Is Needed for Augmented Reality?

AR is simply the act of mixing virtual information with real world objects. This can be achieved through a variety of methods, each requiring different types of equipment. Some examples include:

The greatest limitation is currently field of view. The Metaverse project aims to tackle this issue by using a head mounted display, such as the Oculus Rift. While current mobile phone AR suffers from a lack of sensors, we will be using an augmented reality enabled Android phone in our development kit to increase accuracy and immersion.

Is AR Ideal for Your Product?

Augmented Reality expands the boundaries of virtual reality by mixing in graphics with real-world objects. It also provides an engaging experience without the need for heavy, expensive hardware. There are many benefits to using AR and it will soon become standard in gaming and education.

If you’re interested in learning more about how Augmented Reality and Virtual Reality can help your business, please contact the team of experts at ViviScape. We would be happy to discuss your needs and see how we can help you integrate these technologies into your marketing strategy. Contact us or give us a call at (574) 207-6511. The Buyer’s Journey: How it affects your video content strategy

In today's business world, video is more important than ever. Not only is it a great way to reach and engage... 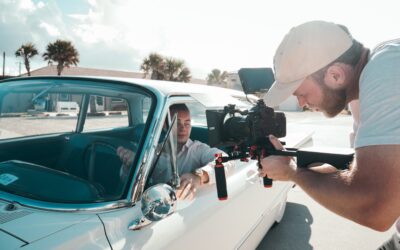 The Power of Video: How it can help your business

Video marketing is one of the most powerful and efficient ways to reach out to customers and promote your business....